Derrick is the founder and owner of Derrick Ha Student Coaching Services. Over the past fourteen years, Derrick has established himself as an author, tutor and lecturer in senior VCE mathematics.

Derrick's unique teaching style is drawn from his personal experiences in the VCE and his active extracurricular involvement. In 2007, Derrick attained a perfect ATAR score of 99.95. He was the only student in Victoria (cohort of 48,840) to achieve perfect raw scores in all six of his VCE subjects.

Click here for the Herald Sun article on his VCE results.

Click here for the University of Melbourne Scholarships media release.

Derrick’s credentials also extend outside of the VCE. He has many successes in mathematics competitions and, in 2007, achieved a perfect score in the Westpac Australian Mathematics Competition. He was awarded a gold medal and the B H Neumann Certificate for being the only Senior student in Australasia to achieve this perfect score.

He was also an invited attendee of four training selection schools for the Australian Mathematical Olympiad Team. In both 2004 and 2005, Derrick was awarded a Diploma by the Russian Academy of Sciences for his accomplishments in the International Tournament of Towns Mathematics Competition.

Derrick's other extracurricular achievements include:

In addition to his educational roles, Derrick currently works as a doctor. He completed his medical training at the University of Melbourne, as a recipient of the prestigious National Medicine Full Scholarship. During his studies, he also won multiple Dean's Honours Awards. Following graduation, he has attained a Diploma in Child Health and also completed his post-graduate fellowship training. Derrick currently works as a consultant medical doctor, in addition to his roles as a mathematics tutor and motivational speaker. 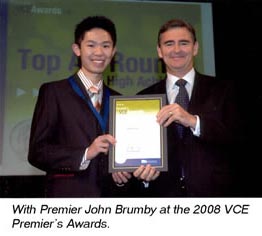 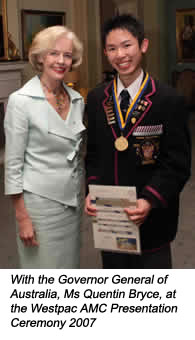